“On Track” with Roberto Diana

Sardinian guitarist Roberto Diana is a very talented writer, instrumentalist and Independent Music Award nominee in his home country Italy. His debut album “Raighes Vol 1” Is a superb collection of acoustic guitar songs that are instantly memorable and beautifully arranged, just one listen to “If You Are Happy” and you will be a captivated by the mans subtle melodies and intriquet nimble finger work. Primarily a regular guitarist Roberto discovered the weissenborn a few years ago and in-between his busy touring and producing duties managed to arrange  and record the song “Dues Ti Salvet Maria” on his weissenborn. The song is a traditional Sardinian folk song and Roberto lovingly arranged it for open D tuning and added some sublime electric backing guitar work. The result is quite beautiful and haunting. I met up with Roberto last year in London and after hearing him play it live i asked him about doing a feature on it for the website. He was more than happy to talk to me about the track and his love of weissenborns.

Hi Roberto, nice of you to drop in for a chat.

The title “Dues Ti Salvet Maria” how does that translate into English?

The title translates as “God Save Mary”.

I understand the song is a traditional Sardinian folk song, is that correct? Tell us about the origins of the song.

Yes, it’s a Medieval traditional holy song from Sardinia.It was written in the XVII Century by the poet Bonaventura Licheri. In 1974 it became very popular when the famous Sardinian singer and actress Maria Carta sung her version (Pipe-Organ/vocal) on television during her show at the St.Patrick Cathedral in New York. After her famous version there were other versions, the most famous in Italy was from the Italian songwriter Fabrizio De Andrè who really loved Sardinia and sometimes he sung it in the Sardinian Language. I remember it was one of the first songs I played when I started to play the guitar. So this is one of my tributes to my loved land.

The black and white video that accompanies the song on YouTube is really great. What are we watching, is it a festival of some sort?

Thanks, there are three different clips, one is me playing my Weissenborn under the big “Olivastro di Luras” It’s Italy’s oldest monumental tree, it’s 3500 – 4000 years old. It’s near Luras, my home town. That bit was filmed by Anna Sanna. The other two clips are taken from a free digital library of Sardinia and are:

1. Mamuthones and Issohadores from Mamoiada. Mamoiada it’s a small village, in the centre of Sardinia and it’s known for its carnival costumes, including distinctive masks worn by the mamuthones (black scary mask)and issohadores (White). They have cowbells on their shoulders. They jump and play all together, making a very characteristic and exciting special procession. You should see them 🙂 this was filmed by Vincenzo Ligios.

2. Sos Colonganos di Austis. Sos Colonganos are similar to the Mamuthones, but they have on their shoulders animal’s bones that are shaken to produce a hollow sound, less strong than that of cowbells, but certainly no less fascinating. Filmed by Daniela Piu

When did you arrange the tune for Weissenborn?

A couple of years ago when I was on tour far away from my home, I was waiting in a train station. I picked up my Weissenborn and I started to play this song, the guitar was tuned in Open D. When my train arrived, the song was ready. 🙂

Where did you record it?

I recorded this song in my “Raighes Studio” in Sardinia. I recorded it with two microphones Schoeps cmc5, with my digi 002 in DAW protools. After that I sent the tracks to my sound engineer Stefano Olla in L.A. to mix it.

How did you discover and learn to play the Weissenborn?

It’s a funny story 🙂 I started to play acoustic, classic and electric guitar when I was 14 years old. At the beginning I learnt by myself. Then I learnt the first 3 chords and I begun to tour all over Sardinia with a dance band. 🙂 Later I begun my music studies and I moved to Milan, where I started to work in studio as session player and producer and toured with different artists. During a music festival where I was invited to play my music (it was 2005), I saw this strange instrument (near your friend Ermanno Pasqualato’s stand). It was a hand made, very ugly, green electric Lap Steel. So I took it and while I was putting the guitar on my lap, everybody run away… Wow! Great start 🙂 Besides me there was Ed Gerhard and everybody had gone to ask him to try their instruments. At that time I had no idea who Ed Gerhard was, so I had a lot of time to try my new ugly green electric Lap Steel 🙂 I bought it and I start to use it, during my live shows and recording sessions. After that, the switch to the Weissenborn was very natural for me 🙂

What Weissenborn did you use on this recording and what tuning?

The Tuning I use on this song is classic open D. Sometimes during the song to recreate the melody, I detune the first string from E to E flat. I use my beautiful Anderwood Weissenborn Big Island Pro. A couple of years ago, Edward Greenfield of Anderwood Guitars, listened my album “Raighes Vol 1 ” and called me to start a collaboration. So, from that moment, I use only Anderwood weissenborn. During my Scotland tour in 2013 Edward presented me with a Weissenborn. His instruments are very beautiful.

Have you recorded and released any other Weissenborn instrumentals?

Yes, in my album “Raighes Vol 1” there Is one “In My Mind”. There are other albums where I recorded some Weissenborn parts which will be released very soon, I hope.

I heard you play a new Weissenborn track when we met in London last year (2014) that was also a reworking of a famous Sardinian tune, tell us about this track.

The track you are talking about it’s “Trumas” a song written by a Sardinian Songwriter that I Love: Piero Marras. When I was a child, I used to listen all his records and I really love his songwriting. That’s why I brought this song with me on tour. I recorded the version you heard, with the amazing Jeff Lewis at the flugelhorn (Jeff was Michael Jackson’s (Jackson Five) trumpet player), with Piero Marras lead vocal and me on the Weissenborn and guitar percussion with brushes. I hope I can release this song soon. 🙂

Are you planning to record and release and more Weissenborn instrumentals in the near future?

Absolutely, I have a full Weissenborn album ready to be recorded and released, but I’ll do it after “Raighes Vol 2”.

What projects are you working on right now?

Right now: May 16th 2015 I released as Free Download some songs recorded and filmed during the last gig of my “California solo Tour” at The Whisky a Go Go in Los Angeles.

It’s available at https://robertodiana.bandcamp.com/album/live-at-the-whisky-a-go-go after that: I’m working on the second part of the Raighes Concept “Raighes Vol 2” who includes some Weissenborn tunes. In September I’ll be on tour in Scotland and you can follow me on tour via my web site or Facebook. I’m still playing and touring with my Rock and Folk band Lowlands and at the same time I producing some artist that I love in my studio. Now I’m working on two albums (Ivan Battistella a very rocking voice, and Donald MacNeill an amazing Scottish songwriter).

The idea born when some musician sent me their cover of my song “If you are Happy”. That song it’s very important to me, as you know, it talks about the loss of my father. So, I decided to try to create a connection between the musicians, pro or not, everybody who loves to be part of the project is welcome. I hate music competitions. Music is not sport for me, so this was a No-Contest, everybody can send me his version of my song with any instruments they love and every version will be included in the compilation. The idea was to push the musicians to be creative using the same song. All versions will be recorded onto a CD and each of the participants will receive the physical copy of the compilation, while non-participants will be able to download it for free from the web. The No-Contest it’s closed now but I received 14 versions, including your original song “Sono Felice” inspired by “If you are Happy”. It was amazing for me to listen to you playing “Sono Felice” live on my Weissenborn at the soundcheck of my show at The Troubadour in London when you visited me. 🙂 I hope to release the compilation in June.

Can i just say thanks for what you are creating with this website! Before your website each Weissenborn or Lap steel fan/player was alone, now you are creating a community where everybody has his space. So thanks, thanks and thanks, keep on sliding my friend and keep alive The Weissenborn Information Exchange! See you soon my friend. 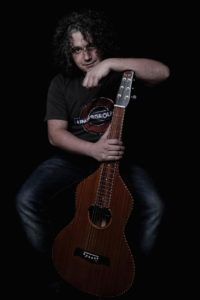