Koa is arguably most spectacular hardwood in the world! there is no other wood possessing the level of chatoyancy as koa wood does.

Chatoyant means “varying in colour when seen in different lights or from different angles”.

The main problem with koa in today’s world and market place is that it only grows on one set of islands in the world, Hawaii!, and then only well on one island in the group and then again only at its best at higher elevations. The wild cattle and pigs on the Big Island of Hawaii find immature koa bark to be a delicacy and can strip an acre of these shoots in one night. This keeps this once plentiful species from regenerating in any significant numbers naturally and that’s quite ironic as it is very easy to cultivate Koa saplings on land where cattle are prohibited from crazing. Many of the forests were koa once grew in abundance to very large specimens have been long logged out or used for native canoe building in bygone years.

When established and allowed to grow, koa grows rapidly when it has its ideal climate, rainfall and soil. Koa can be found on the other Hawaiian Islands but as a rule lacks the complete package of koa from the Big Island. It’s is one of the fastest-growing Hawaiian trees, capable of reaching 6–9 m (20–30 ft) in five years on a good site in its favoured volcanic ash soil. 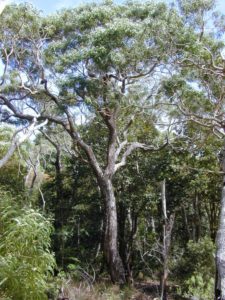 Koa wood is widely considered to be the most beautiful and useful of Hawaii’s native hardwoods, and along with Monkey Pod and Mango it is the most common Hawaiian species to be imported into the lower 48 United States. Visually, Koa has been compared to mahogany, while in terms of working and mechanical properties, it has been often compared to walnut. Because of its nearly equal tangential and radial shrinkage, (its T/R Ratio is only 1.1), Koa tends to be quite stable regarding environmental changes in humidity.

Hawaiians them selves were the first to discover the unique tonal characteristics of koa when they used it to build ukuleles. Luthiers soon caught on to this exotic wood and have been using it in guitar construction since at least theearly 1900’s onwards and most prolifically around the time of Hermann C Weissenborn.

Anyone who has ever seen a nice piece of flamey koa would be hard-pressed to deny its’ stunning good-looks. Highly sought after because of its’ beauty and tonal characteristics, koa is still the weissenborn builders and players choice of wood.

Typically, koa is graded for curl (or flame) and its beauty because most builders are looking for this. In general it is usually graded A (little or no curl), AA (Medium curl), AAA (Full curl), Master (Premium curl). Master Grade Koa which is generally ”off-the-charts” because of its rare, exceptional colour and curl is found in, say, one in ten logs suitable for instrument use, and the rarest master grade wood is found in only one of ten or twenty of those instrument logs. So that’s about every one in 100-200 instrument graded logs is the best of the best quality. 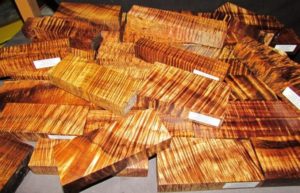 Many discussions have been debated over the years about the ratio of “looks to tone”. Many players and luthiers say it’s actually the least flamey and plainer looking Koa that gives the best tonal characteristics for building weissenborns.

A lot of the sound difference is in the koa wood itself. Arguments have been made about which side of the island and at what altitude koa sounds best taken from, but it is factually true to say that some koa is denser than other wood, and air-dried koa has less moisture content than kiln-dried koa.

As for pricing and availability its not an ideal market place for the consumer. With the tree endemic to Hawaii only, and with supplies dwindling, Koa is very, very expensive to purchase. Boards of highly figured or curly Koa can command fantastically high prices and this price obviously has to be passed onto the customer who wishes to have this desired koa wood used in their weissenborn. It can be upto 50% of the finished instruments price and this is why luthiers often ask for large deposits up front to cover the initial purchase cost of the wood sets. 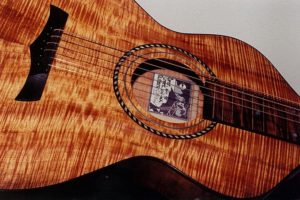